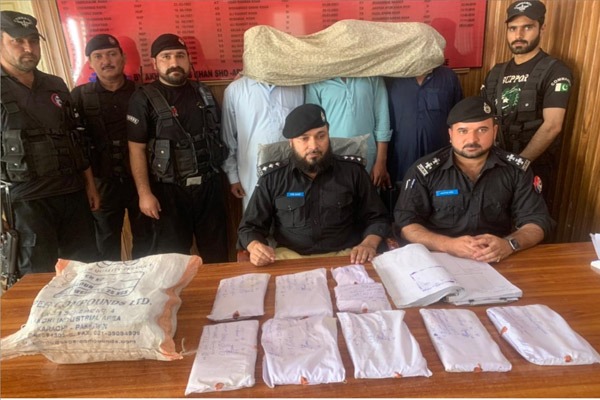 By Adnan Bacha
SWAT: Mingora police have seized seven kilograms of hashish and six pistols in different operations and arrested four accused.
According to police, the crackdown on criminals, anti-social elements, and drug dealers is continuing in the district on the instructions of District Police officer Dilawar Khan Bangash. Effective strategies against criminals across the district are yielding positive results.
SHO Mingora Police Station Akhtar Ayub Khan said he had received a report that a group of drug smugglers from other areas had entered Swat against whom we conducted a covert operation and arrested the accused.
“A total of 7839 grams of hashish has been recovered in the undercover operation while three drug smugglers from Peshawar, Dir, and Mingora have been arrested”. He added
Police said that in the second operation, 4 pistols 30 bore, and two 9mm pistols were recovered from the possession of accused Akbar Khan.
Presenting the arrested drug smugglers to the media, SDPO City Circle Pir Syed Khan said that Swat police had launched a crackdown on criminals, adding that the seizure of seven kilograms of hashish and six pistols was a major achievement.
“Search and strike operations are also underway in different areas of the district in which the police are getting successes, it was not possible to eradicate crime from the society without the co-operation of the people” Pir Syed Khan added
Cases have been registered against the arrested accused under the Narcotics Act and Illegal Arms Act at Mingora police station.