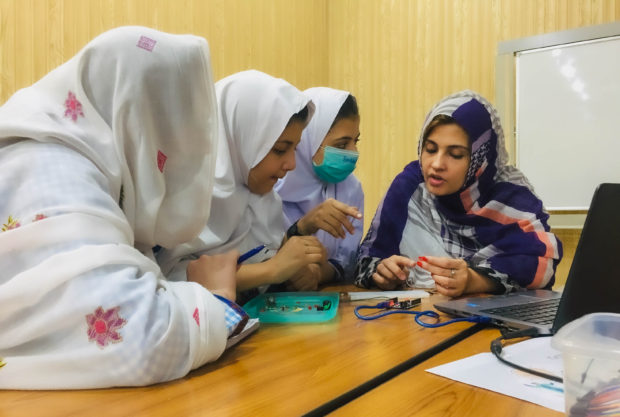 SWAT: Though the world has entered into the fourth industrial revolution with a fusion of technological advancements, replacing the conventional style products and services in all sectors, yet the old-fashioned educational system still prevailed in Pakistan.

However, the initiative of SKOOL21 has been taken to transform the conventional educational system into a modern and up-to-date learning system where students solve problem rather than merely learn to write and read teachers’ notes.

“The corporate partner of STEM.org  USA for SAARC region, the SKOOL21 is actually a STEM and Robotics Educational Consulting Company, aiming to modernize the conventional educational system in a transformational way, harmonizing it according to the modern era because the conventional educational system, is unable to address the needs of the technologically advanced the Fourth Industrial Revolution,” said LMS administrator, Fayaz Alam.

The company is also working on Edtech (Educational Technology) products and has already introduced top class Edtech solutions in Pakistan in collaboration with International Partners.

It has launched a comprehensive skill-oriented and project-based learning program transforming learning to a real education. “The learner, as an entrepreneur will not be a job seeker but a job provider playing role in the development of the country,” Mr Alam added.

Though the conventional education provides literacy but it is unable to bring change in the modern era and this is why the developed nations have already modernized their educational system focusing on robotics, artificial intelligence, genetic engineering, quantum computing and other newly emerged technologies.

“We realize that if we stick to the conventional educational system we will stay behind of the developed nations and will never get on the modern track of development because the conventional educational system was developed for the Second Industrial Revolution which does not match the Fourth Industrial Revolution, thus it does not fulfill the needs of the modern age,” Mr Alam said.

Developed nations as United States, China, Korea, most European countries, even the United Arab Emirates (UAE) and others have already transformed their educational system to the Science, technology, engineering, and mathematics (STEM) educational system.

Syed Shawal a Research & Development coordinator  in the SKOOL21, said that it was a high time to transform the conventional educational system of the 19th century to the needs of the 21st century dynamics. “Education is a building block of a society which must be based on modern lines, not a static one but a flexible to provide smart solutions in wake of any challenge like the Covid-19 pandemic,” he said.

The students, learning under the SKOOL21 STEM Clubs say that in the conventional educational system teachers come to class, deliver lectures, write notes and then go back. In short, a student is completely dependent upon teacher but in the SKOOL21 STEM Club a teacher is only a facilitator showing the path to the student.

“Working in a group the learners in open, friendly and non-formal ecosystem, not only study a problem but also investigate, research, experiment and analyse it from various angles to come up with the best solution,” said Atif Khan a student under SKOOL21 STEM Club in Swat.

In order to meet the 21st Century Skills STEM Club programs are innovatively designed for age group four and beyond.

The fertile land of Swat has produced yet another jewel as the valley boasts off by the first woman surgeon in the region.

Grand Jirga to maintain peace on behalf of civil administration