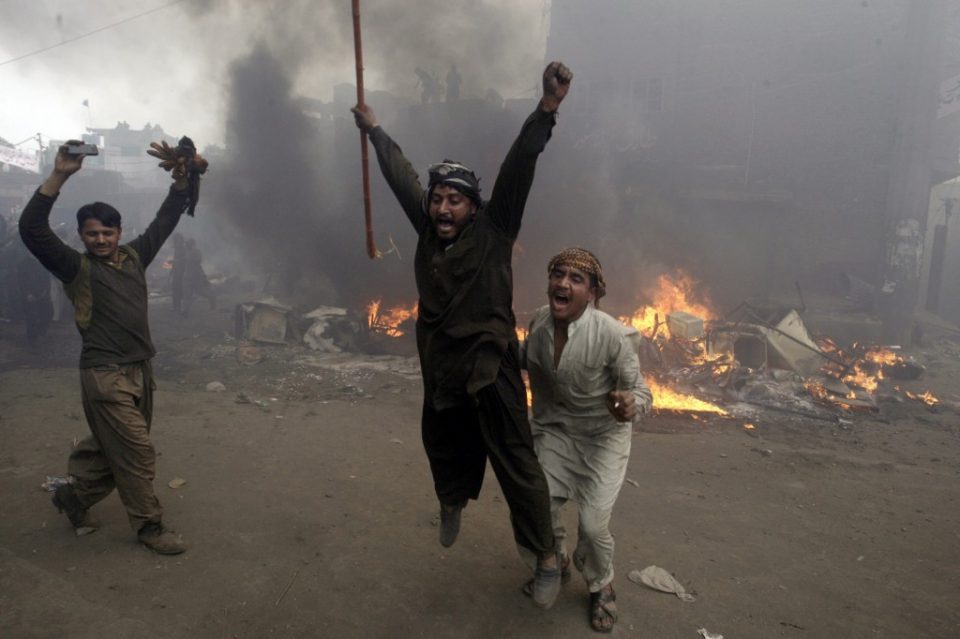 An apparently insane boy attacked and killed a man on charges of  blasphemy within courtroom in Peshawar on july 29 , is yet another instance of the rise of Youth Extremism in the country. An alarming difference in the recent attack is that unlike previous attacks in connection with blasphemy, which were carried out by uneducated or Partly educated Religious fanatics, this time the violence was within court premises  by a young man who came from non extremist familial and political backgrounds. The court murder has shown to us that eventhe forum to which normally cases of blasphemy are referred to, are not immune to the violence carried out in the name of blasphemy. The recent violence and other such cases of rising mob justice are indicative of an increasingly frustrated mentality that is acting out in desperation. Today we have reached a stage where expression of different point of view is taken with resentment and hostility mixed with charges of Blasphemy. Rising extremism and lack of tolerance in our system are transforming our Hujra, Jumat into such places where for the sack of their lives youth are compelled to hide their thoughts instead of expressing them. Un-checked extremism in educational institutes are now controlling a variety of things like ideas and views, intellect, dress code, modes of expression and cultural rituals like recent un-official ban on Attan Dance in the universities where the Fundamentalism is at peak. Before covid,  when life was normal, Incidents of violence happened at Punjab University was a wakeup call and clear demonstration of how intolerance has tightened its grip to the level where authorities seem helpless to control it. Even if the founder of the Nation, Muhammad ali Jinnah were alive today, he too would have to hide his secular ideas and live in fear, like the million of Pakistanis afraid of narrow mindedness.

Today the growing extremism is extending to the realm of ideas, broad and liberal thinking is taboo, superstition cannot be questioned, Islam cannot be portrayed as religion of peace and tranquility with minority friendly nature, religion extremists cannot be exposed as threat to society and state, amendments in blasphemy law cannot be demanded, when a high ranking official in ex government called for amendments he was shot dead. Such acts of intolerance are in breach of law, but when such acts are committed with religious label, the issue goes beyond the realm of law and order. It’s no longer a question of simply finding the perpetrators, prosecuting them for their crimes and punishing them for their illegal and inhuman acts according to the law of the land. The more important question is how did such fanatics acquire a sense of being above the law and constitution. And the confidence that they can get away with their crimes. Scenario becomes worse when they are glorified to the level of super heroes. Due to the slow response of the law enforcement agencies and off course State slow reaction, the intolerance brigades are now organizing themselves and mutating into movements and mass rallies leading towards a chaotic and anarchic situation. We shall look at the dual standards of society, we condemn Hindutva in India and criticize rising intolerance in Indian society, but we keep silence when our political parties join hands against ban on forced religious conversion and child marriages. We are very quick to talk about intolerant brigades of BJP and RSS that brought down Babri Masjid and dozens of other mosques in India, but nobody here  dares to speak against extremist attacks on Ahmadis, Christians, Shias etc in Pakistan. It is intolerance that finds fault with Prime Minister Nawaz Sharif participating in Devali Celebrations of Pakistani Hindus. As intolerance raises, liberal thoughts, pluralism and scientific temper will suffer. In this fight between tolerance and intolerance the gainers will be polarization. Communities will become more inward-looking, more selfish and violent.

Pakistani society has undergone considerable transformations over the last thirty years. Sponsorship of religious extremism, syllabus containing phrases of intolerance, afghan war, post 9/11 war on terror, Madreass education, and states apathy have made things bad. Any fake case of blasphemy is enough to enrage the whole nation up to the level that everything that comes in the way is liable to be burnt into ashes. In discussions every few agree that changes to blasphemy law are truly necessary and that specific clauses made part of the law book are often misused. In the majority of the cases the law is used as a justification to rationalize mob violence. Given the rise of social media especially Facebook and twitter the fake cases of blasphemy are at peak. Cutting across different areas and sects fake cases of alleged blasphemy have triggered mob violence, hatred, empowered extremists and increased divide among different schools of thoughts. The rise in campus extremism, religious radicalism and fake blasphemy charges on liberals are not confined to a particular country or boundary and pose a truly global challenge to Muslims around the world.  Extremist interpretations and narrative of Islam, though still representing a very small minority cannot be simply written off as unIslamic. Recent developments in the aftermath of court murder like protests against arrest of killer, shows how deeply extremism has made inroads in society.  Unfortunately today we live in a society where mob justice is largely accepted as normal practice and is not condemned by State and its institutes. If we continued with the path soon we will have to shut our courts, jails, abolish police system and then everyone will be free to kill anyone he\she deem non confirming transforming us in a truly lawless state.

The writer is associated with Khyber TV as an Anchor