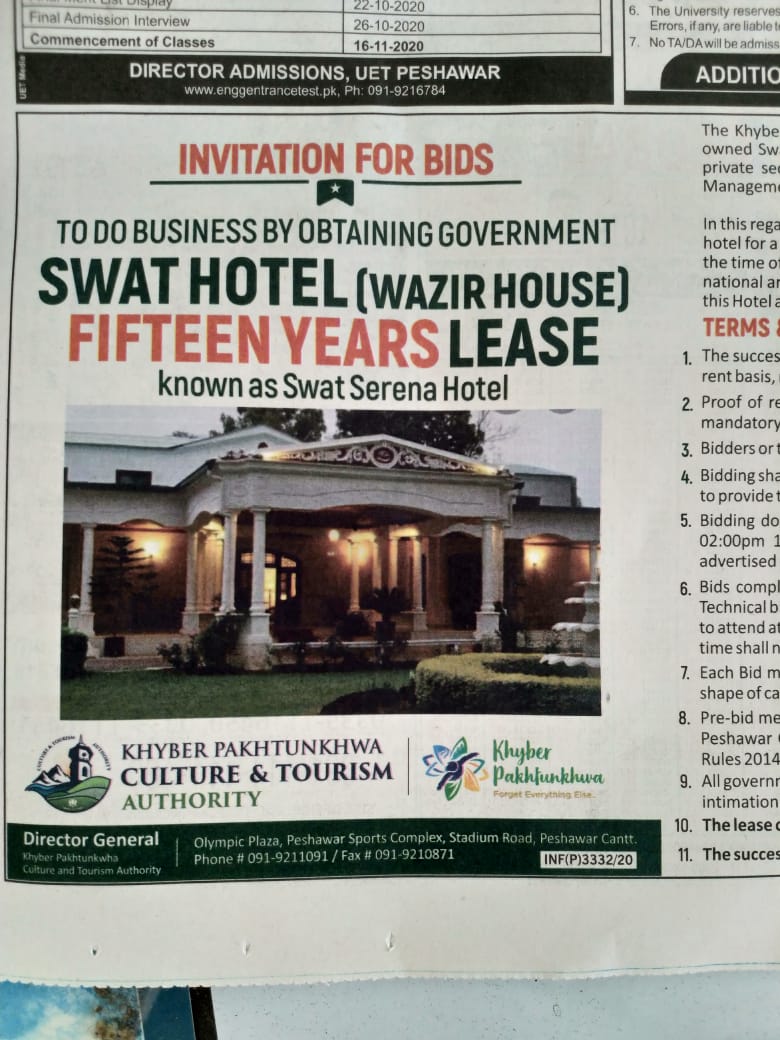 Swat| Saeed Yousafzai | The provincial government’s Department of Culture and Tourism Authority has offered to lease the house of the Minister of State in the former capital of Swat, Saidu Sharif, and the historic “Swat Serena Hotel” building, worth billions of rupees. The advertisement is dated September 22 for auction. The lease period will be 15 years. During the state period, the building was the home of the Minister of State and the State Guest House. The first name of this building is “Wazir House”, the second is “Swat Hotel” and the third and current name is “Swat Serena Hotel”. When the then Minister of State and some other ministers started trying to overthrow the government of Swat Valley, they were arrested and deported by the Wali e Swat on the information of his intelligence unit and the building was turned into a hotel.It also housed the offices of PIA and PTDC. The hotel was named “Swat Hotel”, which remained intact even after the amalgamation of the state of Swat. In 1984, the provincial government leased the building to Serena Hotels, renamed “Swat Serena”. The hotel building is 44 kanals 6 marlas which include 49 rooms for guests, offices, restaurant, staff room, staff house, swimming pool, gym and several lawns. The building is located on the Saidu Sharif Road, the busiest area of ​​Swat, between Wadudia  Hall and the Commissioner’s House. It has a road on three sides. The land value of this historic building in Swat alone is at least Rs. 9.3 Billion. According to Nawab Ali, a real estate dealer, there is no private property on the site and the building starts from the front of  Commissioner’s house and ends on the road to Wadudia Hall. Therefore, the minimum value of this land should be Rs 40,000 per square foot.

“Is a healthy diet key to the positive mindset?”